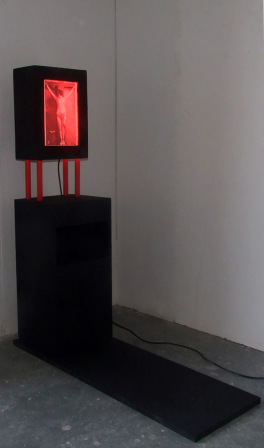 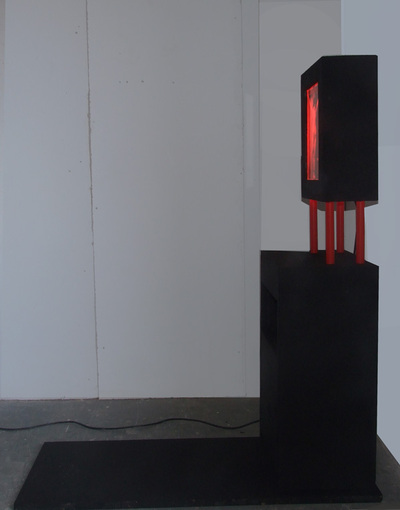 The first idea with the project I want to be a saint came from a song from a Spanish post-punk band from the 1980’s. The song was very transgressive because of the lyrics, which were a reference to the Catholic Church. The song is ironic about the virtuous life of nuns, but sang by a man. The image of a crucified naked woman is from a kitsch postcard from 1900, taken from a book called Kitsh; the representation was also the single record cover art of the song. I set the image inside a light box with a red background; with the red colour I want to symbolize, passion, blood typical of Christ crucifixion and women’s menstruation. I placed the light box over an old fashion bedside table; both the box and table are painted with jesmonite in black like the nuns dress, under the table, on the floor, there is piece of wood painted with the same material and colour, used as a platform. Over the table, vertically, there are four plastic red tubes supporting the box that are illuminated at the same time of the image due to the bulb inside the box, to symbolize candles, characteristic of worship places. The red candles, in the Catholic belief, refer to the Advent, and are used to symbolize the birth of Jesus (Christmas) and is a paradox of death and life.

I located a toy nun inside of a marmalade pot over a vertical cardboard tube painted in black with jesmonite; the red tubes and the cardboard tube are covered with black elastic strips made of rubber as bondage used for restraints from sexual pleasure. The black tube with the nun on the peak is at the end of the floor platform; the nun is in front of the image to create a religious dialogue between them. The nun has a surprised face with her mouth open. With this arrangement, I wanted to make homage to the song as a cultural background, a wink to the feminists and their controversial position to women and religion. The piece is a recreation of a home ceremonial altar. 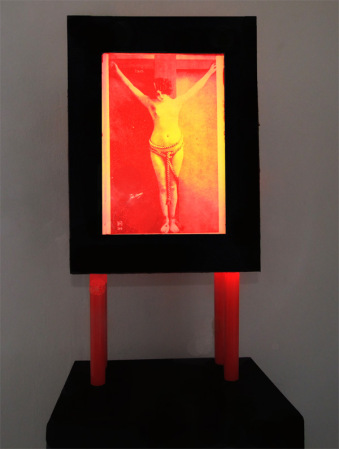