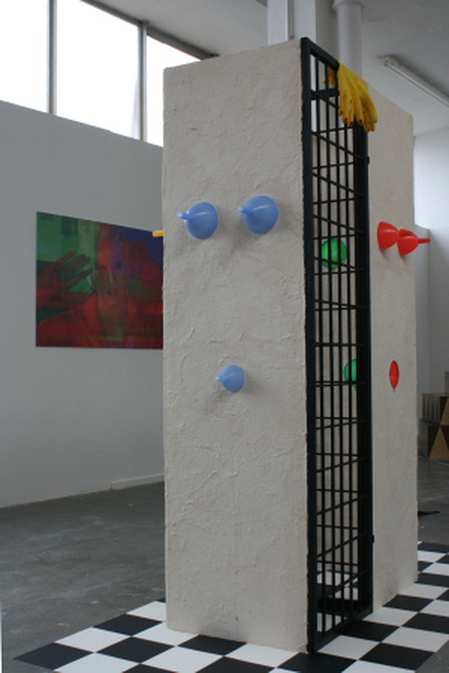 This is a collection of personal research that exposes the myths and misunderstandings that many people have about transsexuals and transvestites. This project is about transgender identity and a consideration of their constructed sexualities in two different scenarios.

With the free-standing sculpture, I want to give an idea in relation to transgender people inhabiting a household environment; to expose their behaviour within in a domestic scene. Social stigma is experienced by transgendered people causing them significant distress; consequentially the home is a place to be protected. This kind of isolation alienates the group and individuals in a place of liberation, such as their expression of gender in the Channel 4 reality documentary My Transsexual Summer. In this documentary, confessions, secrets, fears and happiness are exposed among the group, where all of them are going through gender conversion. The appearance of their sexualisation is revealed by Judith Butler in her book Gender trouble: feminism and the subversion of identity. Butler proposes that by breaking stereotypes and ‘deconstructing’ the way we think about gender we may move to a new parity where people are not limited by masculine or feminine gender roles (Butler, 1990).

My assemblage includes the conical day-glow plastic funnels, in a parody of Madonna’s cone bra; as well as an appropriation of domestic products such as vinyl flooring and yellow washing-up gloves. The ‘putty’ colour of jasmonite and its textured surface refers to human skin in a humorous way. Yet the made in China folding screen, retrieved from the street, references cages or confessionals as well as cross-gendered community imprisoned in their own bodies. It is an appropriation artwork featuring domestic commodities as their subject to create an aesthetic space in which notions and representations of sex / gender are questioned, reinforced, deconstructed, and reconceived.

Cross-gendered representation is the best way for trannies to interpret female roles and transform their appearance when they are performing on a stage. In Almodovar’s films, the sensual eroticism of ‘constructed’ femininity is always present. For Judith Butler gender is a ‘choice’, ‘a role’, as ‘one puts on clothes in the morning’ (Butler, 1990).  Almodovar’s transsexuals are always performing their identities in the film: they are on stage to be more recognisable as provocative, frivolous and witty women.

To embody and celebrate this scene and Almodovar’s saturated colours, I have made a digital poster using two different retro photographs from two different films; both images have been digitally blended to become one. The first image is a pixelated background and the second shows a close-up of the face of iconic Almodovar queen Letal on stage,in the film High Heels.She is wearing red gloves and a blonde wig; the gloves are a symbol of chic, elegance and the lady-like. The on-stage-off-stage link between the sculpture and the image is made obvious by the juxtaposition of yellow washing-up gloves with the image of Letal’s erotic red gloves.

With this gesture I want to activate the space in the studio between the sculpture and the image, as well as express two different situations and scenarios in the transsexual and transvestite communities. The viewer can see both the sculpture and the image as one body, or move from the domestic to the stage, from one format to another, where freedom is possible. It is an allusion to ‘camp’ aesthetics; singing, dancing, music, cabaret, costumes, colours, shows and performances: parody but also celebration.